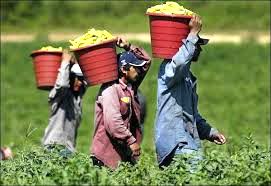 On Friday, July 29, 2016, fifteen members of St. Paul’s including two clergy (Javier Almendárez Bautista and Sarah Phelps) went to visit thirty migrant farmworkers in a labor camp in Sampson County, NC. We were accompanied by Juan Carabana of the Episcopal Farmworker Ministry who had arranged with the men in the camp for our visit.

We left St. Paul’s at 5:30 in the afternoon and drove to Dunn, NC, where we met Juan at the Episcopal Farmworker Ministry. He told us about the ways in which the ministry aids the farmworkers and answered our questions about daily life in the camps and on the farms. Most of the farmworkers are quite young and come from Mexico, many under the federal government’s H2A program. The H2A program permits farmworkers to work here for about six months during the growing and harvesting seasons.

We waited for the workers to return from the fields which was about eight in the evening. We had brought a supper of handmade (not by us!) tamales, desserts, fruit and lots of cold water and Gatorade. Javier said grace and we all started to get to know each other and despite the language barrier, we were soon communicating over delicious tamales. We learned that the work in the fields is grueling and exhausting with the days often lasting fourteen hours. The men battle dehydration, the effects of pesticides and contact with toxic tobacco leaves. We felt humbled by the sacrifices they make daily to bring food to our tables. For the sake of their families at home, they labor from dawn to dusk in a foreign land- our land. They live in cement block buildings with poor ventilation and stifling heat. The isolation seems to be even harder on them than the poverty. We were the first church group to visit them this year and they welcomed us, quietly at first, but after a while, we were sharing stories as well as fellowship. There was much to admire about these men who shoulder their circumstances with such dignity. They spoke of their hopes for the future and of their love for their families back home. A benefit of modern technology is that during their six months away from home they can keep in close contact with loved ones through calls, Facetime and emails home. We left humbled by the experience and grateful to Katie Bricio and Sarah Phelps for their work in arranging for this trip.

People of All Colors and Cultures Together (Sep 6)

Like his disciples Jesus continues to love us even when we don’t quite get it.
Fr. Javier reflects on the Letter of James and what we say to one another: "We d
Hear about Jesus being transformed by a Gentile woman by the Rev. George Admik.
The Rev. Alice Graham Grant reflects on Mark 7:1- 8, 14 -15,21-23.
The Rev. Javier Almendárez-Bautista reflects on what it means to be a religious
Site Map
Copyright © St. Paul's Episcopal Church, Cary, NC