St. Paul’s was officially organized as a mission on June 8, 1958, by Bishop Edwin A. Penick, with 20 families led by its first deacon, Roderick L. Reinecke. Services were held in the band room of Cary High School (now Cary Elementary), as parishioners began acquiring church “furnishings” and building the altar and kneelers themselves. 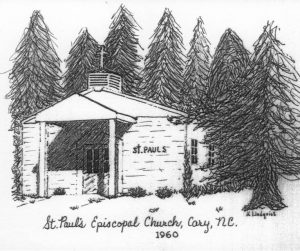 During the tenure of the second deacon, C. Waite Maclin, land was purchased at the current location on Union Street.

In August 1960, parishioners began erecting their new church home, a steel building now known as the “tin building.” A brick Education Building was dedicated in 1973. This building is being renovated into a nursery, expected to open around Easter of 2008. The tin building was used for some years as a meeting site for the AA, scouts, and other groups, but finally had to be torn down in 2004 to make room for the current worship space.

Mr. Maclin was followed by another deacon, Samuel Moore, who like his predecessors became a priest while at St. Paul’s. Each time, ordination to the priesthood was followed by a calling to serve a different church. St. Paul’s first Priest-In-Charge who actually was a priest was The Rev. Mr. Donald W. Fraser (1966 – 1968). During his tenure two trailers were loaned to St. Paul’s by the Diocese for use in the Christian Education program, and an addition was built onto the east end of the tin building to serve as a sacristy.

Rev. Frazier was followed at St. Paul’s by The Rev. Frederick F. Valentine, Jr. (1969 – 1974). Rev. Valentine worked to ensure that new members to St. Paul’s quickly became involved in church activities and leadership. The vestry was enlarged to nine members, and planning committees abounded. The appointment of the first woman Senior Warden, Gert Ferenczi, and the establishment of a new, more successful choir were some of the noteworthy events in this period. 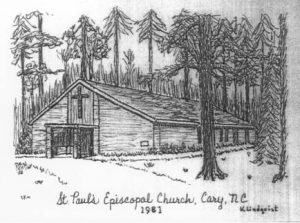 In 1975, the Rev. William Coolidge began his leadership of St. Paul’s Mission. By 1976, St. Paul’s was granted parish status by the Diocese. With Rev. Coolidge’s focus on pastoral care and counseling, the small church grew, prompting the need for a new church building. Although Mr. Coolidge departed in February 1981, the parishioners moved forward with the building plans in the interim period and a new church was completed. During this same period, a search for a new rector was conducted.

On October 31, 1981, St. Paul’s Parish welcomed the Rev. Charles Hocking and consecrated the church. Fr. Hocking brought a more formal manner to St. Paul’s. He promoted the Anglican philosophy of “Via Media,” the middle way, in which people of all viewpoints are welcome to worship together in one church. St. Paul’s still reflects this philosophy today.

As the population of Cary began to boom, so did St. Paul’s. By 1983, the parish added a part-time assistant to the rector, the Rev. Antoinette (Tony) Wike, a transitional deacon and practicing attorney. Ms. Wike was ordained to the priesthood at St. Paul’s in April 1984 and continues as assistant to the rector, with a primary role as the “fence mender” and voice of reason during difficult times.

In 1988, St. Paul’s facilities expanded further, as a Christian Education Building was dedicated. The parish continued to grow, and, in 1991, John Gibson came to St. Paul’s as a transitional deacon. He was ordained to the priesthood at St. Paul’s in November 1992, and continued as a full time assistant to the rector with special focus on the Newcomers, Adult Education, and Pastoral Care programs, until 1999.

A number of other staff positions were added during Rev. Hocking’s tenure. St. Paul’s has had a Church School Director since 1983. After a series of volunteer and paid organists, a Minister of Music position was added in 1989. A Youth Minister was added to the staff in 1990. This position was eliminated temporarily due to budget cuts. A Director was hired for the startup of the Preschool program in 1992.

In 1993, a diocesan mission was started in nearby Apex by several members from St. Paul’s. They eventually called Rev. Gibson to be their Rector. St. Paul’s continued to grow and began to study the organization and function of the church. It became clear that St. Paul’s was in a period of transition and needed a new style of leadership. St. Paul’s had grown from a pastoral level church to a program level church in size, complexity and programming.

At the close of 1996, after 15 years of service to St. Paul’s community, Fr. Hocking retired. The Rev. Dr. James Hubbard served as our interim rector until the search for a new rector was completed.

Just as each of us is on a personal spiritual journey, so too is the wonderful faith community that we comprise. St. Paul’s early vision was to be “the little church in the woods,” but the Holy Spirit seemed to have another dream for us. As this was becoming evident by the constraints our space was placing upon us, some questions began to emerge: “Who are we called to be?”, “What does God want us to do?”, “How do we live out this purpose?” In February 1998, our congregation came to the decision that God was calling us to build a larger worship space so that all those who came to St. Paul’s would find a warm Christian welcome. 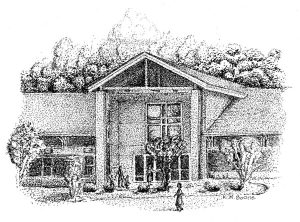 Helping us move toward this vision, the Rev. George Adamik was called to be the new Rector of St. Paul’s in 1999. Following a capital campaign in 2001, construction on the new buildings began. This wonderful dream culminated in 2004 with the dedication of our new worship space, youth wing, meeting rooms, and offices. Besides providing a beautiful worship space, our buildings have become a gathering place that is constantly bustling with activity.

St. Paul’s numerous vocal and handbell choirs choirs meet each week, our youth program is bursting from its new wing, our meeting rooms are filled with parishioners taking part in our many ministries and educational activities, and our preschool nurtures more than 100 children each year. Our facilities also provide a means for reaching out to the surrounding community. Our parish hall and youth wing are made available to Scout Troops, AA, blood drives, various Diocesan & Convocation meetings, and our sanctuary serves as a concert hall for inspiring musical performances.

It has been an exciting journey to where we are now, and it will continue to be exciting as we follow the path that God has set out for us.

The above history was written circa 2004, but has not been updated since then.  On Sunday, September 3, 2018, St. Paul’s celebrated its 60th anniversary.  As part of the celebration, a “History Wall” was created in the corridor of the church building.  As part of this wall, Jenny Smith created a timeline of memorable dates in St. Paul’s history.  The timeline is given below.  Click HERE for pictures.