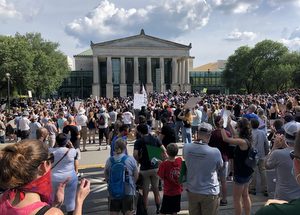 Bayard Rustin, the architect of the March on Washington and one of the unsung heroes of the civil rights movement, is well known for his 1965 essay, “From Protest to Politics: The Future of the Civil Rights Movement”. In it, he makes a provocative statement about the nature of social change:

Hearts are not relevant to the issue; neither racial affinities nor racial hostilities are rooted there. It is institutions—social, political, and economic institutions—which are the ultimate molders of collective sentiments. Let these institutions be reconstructed today, and let the ineluctable gradualism of history govern the formation of a new psychology.

In 2020, the United States is home to 5% of the world’s population, and yet it holds 21% of the total number of people incarcerated worldwide. In 2017, more than 95% of arrests in the United States were for nonviolent offenses, and yet—despite the fact that crime rates have fallen sharply over the last quarter century—our spending on jails and prisons reached $87 billion in 2015, an increase of 1,000% since 1975.

Of those incarcerated, African Americans are disproportionately represented. Though black and white people use drugs at similar rates, the imprisonment rate for African Americans is six times that of white people. In Minneapolis, where George Floyd was murdered, police use force against black people at seven times the rate of whites.

A few bad apples cannot be responsible for such egregious inequities. Is it any surprise that our justice system is under renewed scrutiny?

Let me be clear here: this is not a conversation about individual police officers and their racial “affinities and hostilities.” Indictments might be long overdue, but to focus solely on individual responsibility would be to miss the forest for the trees. Ahmaud, George, Breonna, and countless others—including those tasked with enforcing laws that continue to produce unfair, inhumane, inequitable outcomes—deserve better.

Rather, this is a conversation about policing as an institution: about its very nature, history, and purpose. It is a conversation about the conditions under which police officers, the use of force, and incarceration are necessary and the conditions under which they are not—when alternative interventions might better serve the needs of the community at large.

Calls to reform, defund, divest, and re-invest police budgets are attempts to take these questions seriously. We would be wise to listen with the intent to understand what is at stake here.

There are plenty of resources out there for you to explore, and I will not exhaust the options available to you in a single post. Instead, let me outline a few steps that I have found useful.

Don’t forget to pray. You might think this is a natural thing for a priest to name, but I need this reminder just as much as anyone. Prayer is not an excuse for inactivity, though—rather, it is precisely that which helps people of faith discern what actions to take. In a world of breaking news and short attention spans, prayer calls us to deeper attention: to God (whose love and righteous anger go hand-in-hand), to ourselves (that we may acknowledge, accept, and learn from our mistakes), and to others (that we may better hear the needs and concerns of our neighbors).

Educate yourself. From Michelle Alexander’s The New Jim Crow to Ibram X. Kendi’s How to be an Antiracist, there are plenty of resources out there to help you understand the state of race in the American context. If you are white, do remember that your education is not the responsibility of the people of color who happen to be in your social circle. Trust me: you are not the only person asking for their input on race relations.

That does not mean you need to do this alone, though: take the first step by doing a simple Google search on the authors named above, get to know their work and that of others in their field of study, and invite a friend to join you for a conversation about a book or article of your choice. Be open to questions, resist the urge to prove that you have mastered the subject, and create space for courage, honesty, and vulnerability. You and your friend will be better for it.

Organize. In the middle of a pandemic, it may seem like this option is out of the question. Organizing, however, is primarily about getting to know our neighbors and working toward common goals across the differences that divide us. There are already institutions enabling this work, even when we are physically apart—ones that you can participate in and support here and now.

If you are a member of St. Paul’s, I invite you to support ONE Wake, a nonpartisan, broad-based, interfaith, and inter-racial coalition from every corner of Wake County. There are also others doing this work. I invite you to support organizations that prioritize the concerns and leadership of those most deeply impacted by the issues they aim to address.

If we are to do the work of love, we cannot settle for individual conversion. We must make sure that public institutions address the needs and concerns of the most vulnerable.

That, after all, was the beginning of the thing we call Church. Let us sink into our Pentecost roots, and work toward a more just and loving world.

Ibram X. Kendi’s How to be an Antiracist

Debby Irving’s Waking Up White: And Finding Myself in the Story of Race

William Holman Hunt’s painting,  “Light of the World,” shows J
On the Feast of Christ the King, Fr. Javier reflects on the difference between p
How we then discover that God has always been with us in the changes and chaos o