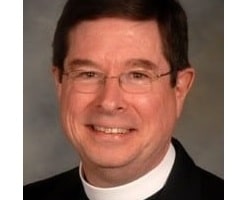 While I am thankful for the verdict in the Derek Chauvin case, there is so much more to be done. The ever-present sin of racism is so ingrained in our society and in our lives. And we need to be reminded that sin is not just something we ask forgiveness for, but also something we commit to changing. Amendment of life is a part of forgiveness. And amendment of life is not just about each of our own personal lives, but also about the life of our society and culture. I would encourage us to not lose hope. Actually, we cannot lose hope; it’s not an option.

I want to share two statements of two bishops of the Episcopal Church. Both are African American and bring to this time words and experiences that those of us who are not African American desperately need to hear.

These statements inspire me and give me hope, hope for the Easter journey ahead of us.

Last Sunday, during my visitation at St. Paul’s, Indianapolis, one of the saints in that congregation asked me how I was doing during these long days in which the deaths of Black and brown people at the hands of police are a daily news story. Now that Derek Chauvin has been found guilty on all counts for the murder of George Floyd, I want to tell you how I answered that question.

One day shortly before the trial began, I realized that in the busyness of the last few months, I had let my license plates expire. It put the fear of God into me. As soon as I realized what I had done, I immediately rearranged my day to get to the Bureau of Motor Vehicles. On the way, I had to explain to my ten-year-old son why I was shaking as I was driving, and why we had to go right then, urgently, with no delays.

And then, a few days later, fueled by the dread that every Black mother carries in her heart, I talked with my son again. I told him that in just a few years when he learns to drive, he must never, ever, for any reason, let his tags expire, and I told him why. My soul is still in anguish at the need to warn my son against what awaits him in the world.

This trial has been a very personal issue for me, and for many other Black people. I wish it weren’t. I am relieved that Derek Chauvin has been held accountable for the murder of George Floyd. But accountability is not the same thing as justice, and it will not bring George Floyd back to those who loved him.

Tonight, fresh with relief at the verdict, I am aware of my deep longing for true justice, the kind that becomes possible when people like us promise to stand with the vulnerable and marginalized to transform systems of injustice. When we do that, we are committing ourselves to creating a world in which young men can learn to drive without their mothers fearing for their lives. When you dedicate yourselves to this work, you mean that you want your bishop to be able to drive to the BMV without panic, even on expired tags. When we stand together as beacons of Christ, we are saying that we want communities in which the public safety system protects the lives of all of God’s people and in which we no longer need to learn the names of those who have been taken from us by police.

In the days to come, many of you will want to show up and stand in solidarity with our allies. I pray that you do so peacefully, with hearts bent on justice and mercy, and with your eye on the Beloved Community we long to be.

Thank you for your witness, this Eastertide and always.

This evening we have learned that former Minneapolis police officer Derek Chauvin has been found guilty of every charge in the death of George Floyd.

Still, justice requires more than sending one man to prison. Justice requires us to acknowledge and change the fact that Black, Brown, and poor Americans are often treated differently than other Americans, particularly in encounters with law enforcement and the criminal justice system.

On the Feast of Christ the King, Fr. Javier reflects on the difference between p
How we then discover that God has always been with us in the changes and chaos o
How do we, with the gifts we’ve received at Baptism, become part of a community