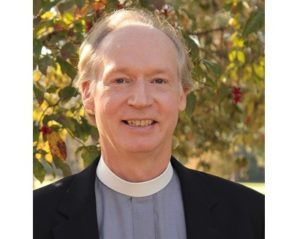 Breaking news from the Diocese:

“On Saturday, March 4, 2017, the Rev. Samuel Rodman was elected XII Bishop Diocesan of the Diocese of North Carolina.

He was elected on the third ballot by the delegates gathered for a Special Electing Convention in Phillips Chapel at Canterbury School in Greensboro, North Carolina.

Rodman currently serves as the Special Projects Officer for the Diocese of Massachusetts, a role he took on after spending five years as the diocesan project manager for campaign initiatives, where he engaged congregations, clergy and laity, in collaborative local and global mission through the Together Now campaign, helping to raise $20 million to fund these initiatives. Prior to that, Rodman spent 16 years as the rector of St. Michael’s in Milton, Massachusetts, during which the parish established a seven-year plan that included a capital campaign for a major renovation of the church building. […]

Ordained in 1988, Rodman is a graduate of Bates College and Virginia Theological Seminary. He is married to Deborah Rodman, and they are the parents of two adult daughters. In his free time, Rodman enjoys basketball, golf, kayaking, walking his dog, crosswords and creative writing. […]

Pending the canonically required consent of a majority of the Episcopal Church’s diocesan standing committees and bishops with jurisdiction, Rodman will be ordained and consecrated as the XII Bishop Diocesan of the Diocese of North Carolina on July 15, 2017 at the Duke University Chapel in Durham, North Carolina.”

Like his disciples Jesus continues to love us even when we don’t quite get it.
Fr. Javier reflects on the Letter of James and what we say to one another: "We d
Hear about Jesus being transformed by a Gentile woman by the Rev. George Admik.
The Rev. Alice Graham Grant reflects on Mark 7:1- 8, 14 -15,21-23.
The Rev. Javier Almendárez-Bautista reflects on what it means to be a religious
Site Map
Copyright © St. Paul's Episcopal Church, Cary, NC